Isaiah is doing so much better in so many areas, that I really haven't had much to write about. He's mainstreamed for most of the day and only goes to Speech and one other "pull out" during the day. He's simply amazing.

Poor thing, his teeth have come in so crooked that the dentist recommended not waiting until he was older for braces. He would probably have to have several of his adult teeth pulled if they waited. So, off to the orthodontist he went.

Here, Isaiah is "posing" for me in front of the closet. You can kind of see his teeth. 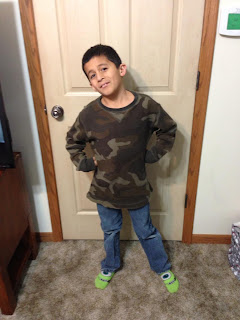 In this picture, Isaiah is sporting his new braces, and a medal he won for the most improved player on his basketball team. 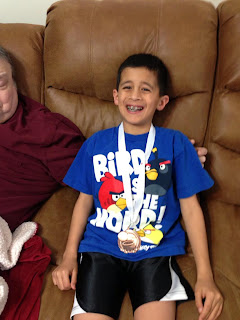 He's such a cutie... and he loves coming down to our house and spending time with his "crampa."
Posted by Teresa - My New Normal at 2:00 PM 3 comments: