Isaiah had a wonderful Christmas with his mom, dad, and baby sister, Anna. He got lots of great gifts and was (typically) very excited and thankful for his gifts. His other grandfather (my ex-husband) and his girlfriend sent him a really cool kite - Darth Vader's attack vehicle. It's really neat.

We got him a K-State hat (he LOVES K-State and wants to go there) and he left it on for most of the day. A lot of his things had to be put together and I'm glad he's got an engineer dad because I sure couldn't do it. 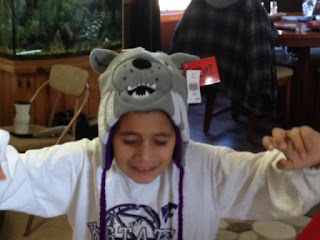 Isaiah had his Christmas program at school last week. We didn't get to go but Amy posted a video of it to Facebook and it was really cute. It was called Cowboy Christmas and they all dressed up as cowboys. Very, very cute. They had to buy him a cowboy hat for the show. He looks so cute! 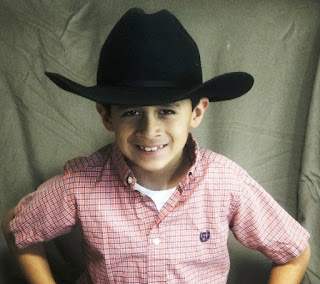 We also went to see my mom last weekend. Glad to see her as she's been very ill this winter. Sadly, I don't think GG will be around that much longer so the time we spend with her and the pictures we get to take will be memories that we can all hold onto. 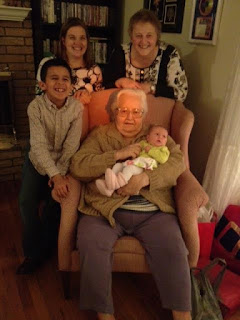 Mom thought Anna was beautiful (of course she is!) and told Rex how proud she was of him. He told Mom that he was thrilled to be a dad to Isaiah and Anna. It's wonderful to have him in the family!

Amy took some pictures of the kids to make into Christmas cards. She didn't order enough so I didn't get one, but that's OK. I get the real thing... LOL! 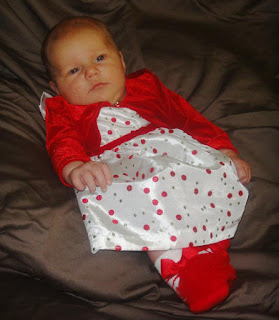 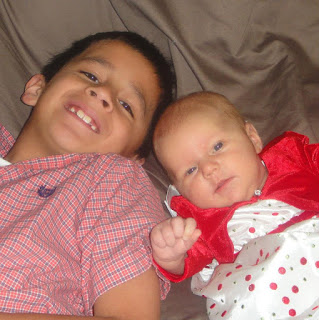 Isaiah is doing so well in school this year! He's only coming out for about 30 minutes each day and during his IEP, Amy and Rex were told that he'll probably not be pulled out at all next year. Although Isaiah has worked very, very hard this year, I give a lot of the credit to Rex being in his life. Ron and I could provide the love and attention that Isaiah needed, but we couldn't be the "DAD" that he needed. Rex has stepped up to the plate and hit a home run.

The official adoption date is 1/12/12! Isaiah will officially be Rex's son and a "shirts" just like his mom and Anna.  He's already using his new name at school but the court date is the 12th. The loser "father" has already called the court and Amy's lawyer saying that he doesn't have to pay child support any more. He's a weed... But, we're all glad that he's dropped off the face of the earth and doesn't want anything to do with anyone but his current wife and her seven (yes, 7) kids. They all call him "daddy" so that's fine by us. (He's got a FB page and doesn't even list that Isaiah exists - he lists his wife and "their" kids' names. No mention of Isaiah at all. In fact, in one piece of correspondence to Amy he asked her if she was sure Isaiah was his. Yeah... he doesn't look anything like him...)
Posted by Teresa - My New Normal at 9:16 PM 1 comment: