Since Amy got married and moved my boy out, we have less to write about. I have a few things but it's not quite the same as being there.

One day a couple of weeks ago, Ron called Amy to see how his boy was doing, so she asked Isaiah if he wanted to talk to his Crampa. Isaiah came to the phone and said (in a very deep, solemn voice), "Sorry Crampa, I can't talk right now."

Isaiah whispered, "I'm hunting wild game. I have to be very quiet so they don't hear me sneaking up on them."

Then he gave the phone back to his mom, who explained that Isaiah had gotten a Nerf gun and was getting bored with just shooting the darts into the air. So, Rex (new daddy) had hidden the carved bear they had and one of Isaiah's stuffed animals so he could "hunt" them with his new toy. 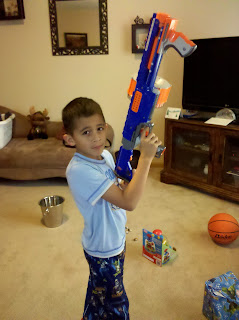 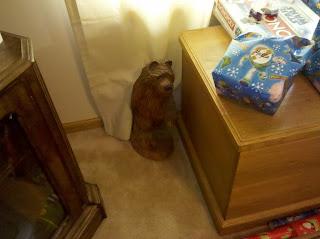 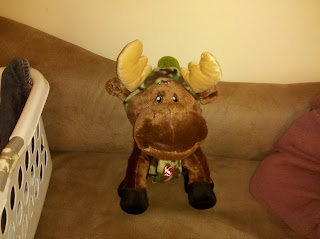 I have to say, the hunt was quite successful. He found them both very easily the first time so Rex hid them again and Isaiah had to work a little harder to find them. He found the bear pretty easily and said, "Sorry Charlie, you are dead” as he shot it. The moose was a different story, so Rex played "hot" and "cold" with him until he found it.

Calling Crampa on the phone:

Isaiah misses us as much as we miss him so frequently his mom will let him call us to talk. Mostly, he tells us that he misses us and that he's worried about us since he's not here. One of the most recent calls we got from him went like this:

(hand the phone to Ron)

Ron: Hi bud, how are you?
Isaiah: I'm fine. I just wanted to call you and see how you are.
Ron: I'm fine. (and they talk a few minutes about school and stuff)
Ron: You want to talk to Grandma now?

He hangs up the phone!!

Said Isaiah told him he was too busy. He would talk to me later.
Posted by Teresa - My New Normal at 8:00 PM 3 comments:

Thanks!
Posted by Teresa - My New Normal at 8:09 PM No comments: