Tuesday was Isaiah's 7th birthday. He started counting down the days about a week ago. "Crampa, do you know how many more days til my birthday?"

No, Isaiah, how many more days?

"It's only seven more days! Tomorrow will be six days, and then it will be five days!"

That went on every day until the 20th. He was so excited that day, but he did have a green day at school so that was totally awesome.

Since Amy has school on Tuesdays I planned on taking Isaiah out for ice cream and to let him open the presents I had gotten for him. Ron had other ideas and we ended up going to a local restaurant and they always sing to birthday recipients.

When I picked Isaiah up from latchkey, I noticed that he had a birthday "crown" that he'd been able to wear at school. I told him to go ahead and leave it on and that way the server would know it was his birthday. He was pleased with that idea, so off we went. When we walked in to the restaurant, the host/hostess staff wished him a happy birthday and called him by name.

They said it was because he had on his hat. "Oh..." When the server came to take our order, she wished him a happy birthday and he said, "Call me Isaiah. See, it's on my hat. I-s-a-i-a-h spells my name - Isaiah."

They said they would and took our order. There were many people celebrating their birthday that evening. Every time the servers would head out clapping their hands and singing the birthday song, Isaiah would crane his head around to see if they were headed our way. No, I told him that he had to eat his dinner first. 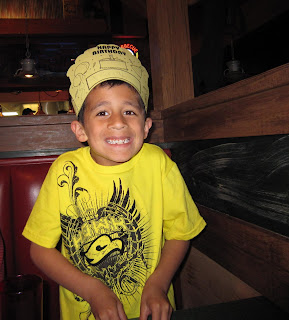 Finally, it was his turn! He was grinning from ear-to-ear when they came to the table with his birthday sundae. He ate almost all of it, too. 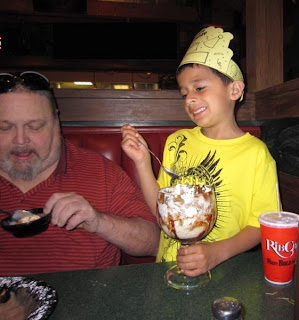 Crampa helped a bit, but he managed to do a pretty good job on it. 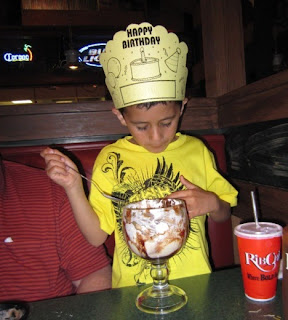 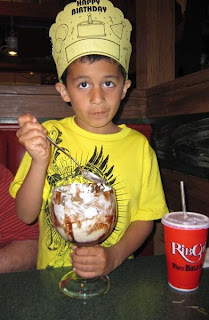 I need to talk

Yesterday after work, I decided to visit Kohl's to do a little shopping. I had a 30% off coupon and a $95 store credit that was burning a hole in my pocket. I only shop at Kohl's when I have a discount coupon and I only buy what's already on sale. I called Amy to ask her a question and said since it was the last day to use the coupon, she should bring Isaiah and do his summer clothing shopping. She thought that was a good idea, so about 15 minutes later she showed up.

I had to call Ron to tell him where I was (he'd forgotten "where" I was going although he did remember I was stopping somewhere) and Isaiah wanted to talk.

Isaiah: I need to talk to my Crampa.

Me: Why do you need to talk to him?

Isaiah: I have somefing to tell him.