Amy is in charge of certain big event at work every year and part of the requirements to participate is that you get your reservation in on time, and if you're bringing a guest you get the guest registered. This big event happens right after the income tax deadline in April. In April 2008, one of the managers needed to add her guest at the last minute. Because she didn't make the reservation on time, she told Amy that she'd make Isaiah a blanket for his bed. Amy got the blanket today. It's a quilt that has seams you have to trim to make it a "rag" quilt.

Amy was sitting on the chair with the scissors doing the trimming and Isaiah walked up to her and said, "Mommy! Stop - you're breaking my blanket! You're going to ruin it."

Ron watched Isaiah today because there was no latchkey and no school. We were a bit nervous about it but he did have Star Wars, Power Puff Girls, peanut butter and jelly, and cereal. We figured he could handle it.

About 3:00, I got a phone call - "I need you to come home. I'm really sick and I might need to go to the hospital." It's a 20 minute drive, so I shut down my computer and headed out as quickly as I could. Ron had a visitor this afternoon from a friend's church but he had never met the man. He felt really bad that Garry had to be here while he was having issues, but I was glad there was another adult here. Isaiah did not understand that Crampa was having a low blood sugar and other issues.

I got home, asked him if he still needed to go to the hospital, and when he said he did, I called an ambulance. I cannot move Ron when he's in that condition and needing help. Before they got here, he decided that he would not go and that he was feeling better. His sugar was back up (had been 44). So, I cancelled the ambulance but about five minutes later, they were on the doorstep anyway.

Isaiah and I went to the door and he said, "Are you the aliens?" I think they thought he said "ambulance" so they said they were. They checked Ron out and carried on a conversation with Isaiah, reassuring him that they were here to help his Crampa. Isaiah has had a couple of very traumatic experiences with EMS, including the time he got burned and another time when he had a minor head injury. The sight of them usually is enough to send him into hysterics.

As they were leaving, he asked them if he had been brave. They assured him that he had, indeed been very brave.
Posted by Teresa - My New Normal at 9:17 PM No comments:

When I get bigger, I'm going to call mommy "Sweetie" because I think she's sweet.

It's kind of hard to get him to understand that just because he wants someone in the bathroom (or near the bathroom) when he's in there, doesn't mean everyone else wants an audience. With Ron's recent surgery and such, he has more "issues" in the bathroom than usual - which was substantial before the surgery.

The other day, Ron was in his usual position in the bathroom. Isaiah came in and noticed Ron's pained expression (he was in dire pain), patted him on his stomach and said, "Are you having a baby, Crampa?"

Ron had to stop what he was doing so he could crack up instead.
Posted by Teresa - My New Normal at 10:17 AM No comments:

Last night, Isaiah asked me, "Who is the man with four balls?"

"You know, that man on UP with four balls on his cane."

Oh... that makes perfect sense. Too bad I couldn't remember who it was fast enough to give him an intelligent answer.
Posted by Teresa - My New Normal at 7:08 PM No comments:

There has been a lot going on since my last post. Isaiah got a flu shot and it was a harrowing experience for him and the staff. He is terrified of needles. The next day he got sick so missed two days at work. LOL - I mean school. I'm sure he thinks it's work.

He threw up at school - at lunch, no less. He said he "frew up" on the floor, in the trash can, on the table, and in the bathroom. He "frew up" on his friend's lunch box (I bet that was impressive; wonder if he still has that friend?).

He's been having more trouble getting green days but when he gets a yellow day we don't always know what it is for. Amy asked the teacher to please jot a short note to say why he was in trouble. They are just amazing. "Isaiah had yellow because he took too long to fill out his journal." Hello - he is SIX and has a learning disability. Do you think that "too long" is a bit vague? How long is too long and what do you consider reasonable? I'm not sure I like this woman.

Last night when I picked him up I asked him what he thought we should get his mom for Christmas. He said, "I know!!"

So, I asked him what.

"A Power Puff Girls game so she can be the hero."

I don't think she needs a Power Puffs game. I don't even know if they make a game like that.

"How about a Star Wars girl? She can be the queen hero."

I don't think she would like a Star Wars girl.

ah... Smart thinking - get mommy a gift and if she doesn't like it she will share with him.
Posted by Teresa - My New Normal at 7:20 PM No comments:

Isaiah was Darth (Dark) Vader this year. He has become Isaiah's new favorite character and many things are Dark Vader themed. Also, we have to say the whole thing - Dark Vader, not just Dark, or Vader, but Dark Vader. Isaiah wants him to be a good guy because Luke Skywalker really needs his dad. Hmmm... I think Isaiah is comparing Darth Vader to his lack of a father in his life, and he is Luke Skywalker. Not sure, but maybe.

Here are some pictures of him in his costume. He is so cute. I'm not prejudiced. 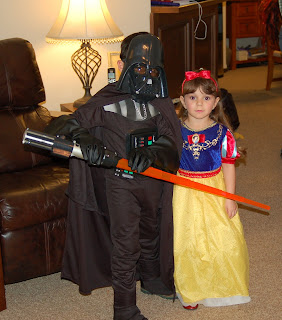 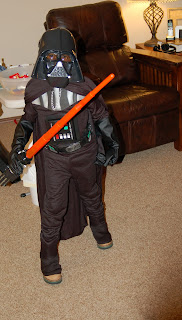 The little girl next to him is the daughter of Amy's friend. She loves Isaiah and I have a picture of her looking up at him with adoring eyes. It is so cute.
Posted by Teresa - My New Normal at 1:40 PM No comments: