Isaiah likes to watch Ni Hao, Kai-lan. There have been times he's told me things and then said that he was speaking Chinese. That's nice.

Last night, as Amy and Isaiah were leaving he saw a plane. It was pretty dark outside so all he could really see were the flashing lights. We had just been talking about our plane rides and how much fun they were. So, he had to have Amy and I both stop what we were doing and look at the plane.

Can I marry you?

Grandma, can I marry you? I want to marry you because I missed you.

You want to marry me? That's nice, but I'm already married.

You are? Who married you?

No, when your mommy was just a baby. She was three years old.

Thank you for picking me up at latch key. Can I show Crampa my prizes I bought?

That will be fine... Show Grandpa your prizes.


~Maybe that will get his mind off of marriage.
Posted by Teresa - My New Normal at 7:39 PM 1 comment:

I have to say, traveling with Isaiah was not bad. He really was very cooperative and didn't have any melt-downs. Sure, he had a couple of instances where he was less than perfect - and actually acted his age - but for the most part, he was a real gem. We dressed him in his pajamas and a pull-up for the flight out because we'd be landing late and I didn't want to have to mess with trying to make sure that he stayed dry in his sleep (he is prone to "wet" nights). 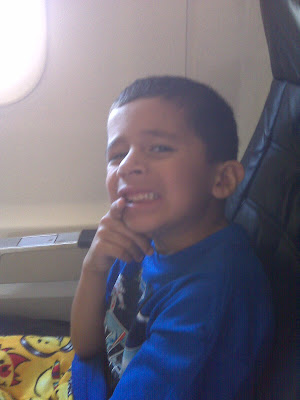 He was charming on the flights out. Several people commented on how good he was.


In addition to spending one day on the base waiting for Shaun's ship to return, Isaiah got to go swimming (which he loved), go to the beach (although he decided it really wasn't a beach 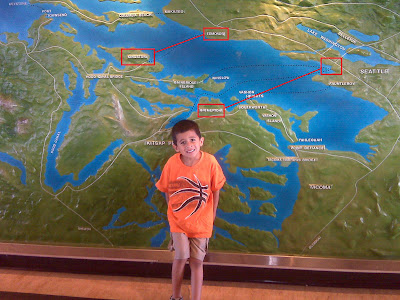 since there wasn't any sand - only rocks), go for an ice cream sundae, go to a farmer's market, ride the ferry from Kingston to Edmonds and from Bremerton to Seattle. 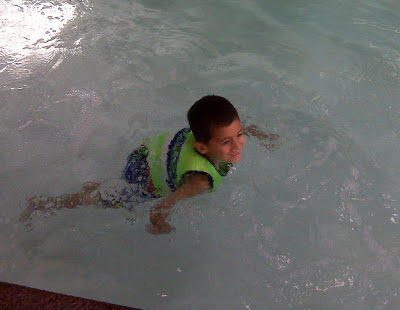 We spent our last night at a hotel in Seattle because I didn't want to fight incoming traffic on Monday morning. Since we had a relatively early flight out Monday morning, and I was really unfamiliar with the area, I opted for going into Seattle on Sunday, getting a hotel room, and returning the rental car early. That ended up being a very smart move. The hotel wanted to charge $20 to park the car there, but they had a free airport shuttle. So, we returned the car to the airport and we rode the shuttle back to the hotel and then Monday morning had the shuttle drop us and our luggage back off. It cost a few bucks in sky cap tips but much less than $20 AND sky cap tips.
Isaiah enjoyed watching cartoons in the morning before we headed out 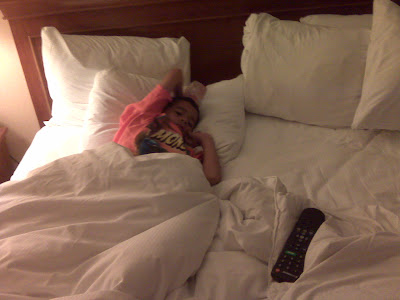 Other highlights of the trip:

Keeping himself entertained while waiting for the ship 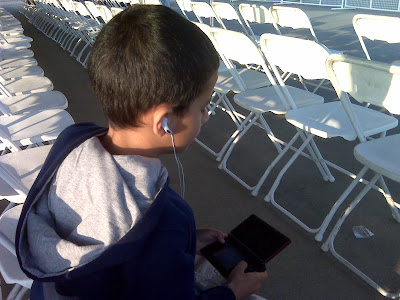 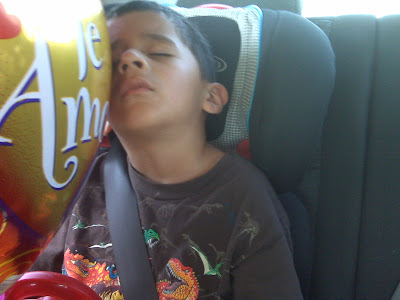 The ride home from spending more than nine hours on the pier. It was a very long day that started at 5:00 am.

Enjoying some French Fries while waiting for the ferry. 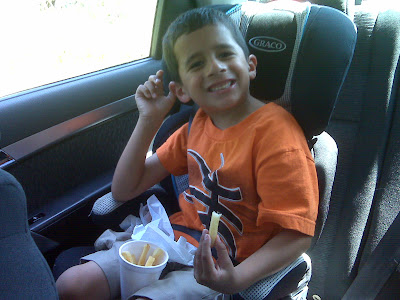 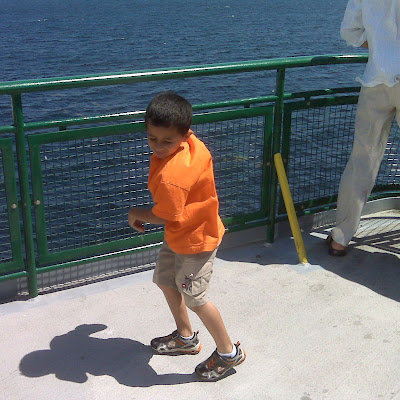 Checking out the dock and pier: 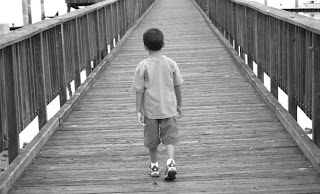 And, finally, coming home. Isaiah decided that he needed a welcome home party and cake. I'm not entirely sure why he thought he needed one, but he did. Luckily, he told me while we were waiting to take off and not after we took off. I was able to send a quick text message to Amy that he thought he needed a welcome home cake. She got the message and showed up with welcome home balloons and cupcakes for him. I'm sure the folks waiting in the same area as her thought she was waiting on returning military (the balloons were camo-green) and the grins on their faces when Isaiah came down the ramp were priceless. They thought the whole thing was very cute and touching. 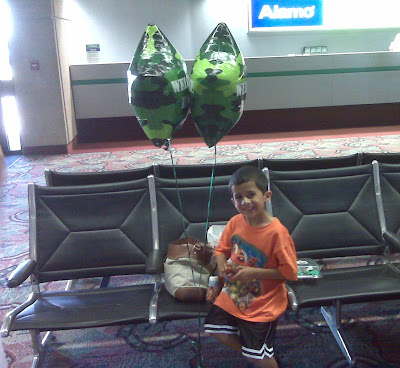 The night before we flew home, he had me call her so he could say that he wanted her and Crampa to say "Surprise!" when we got home. She asked me what brought that on and I couldn't say - only that he'd mentioned it more than once. He didn't forget either. When we pulled into the driveway, he made me wait outside with him while Amy went inside to tell Crampa what they had to do. Isaiah and I walked up the sidewalk, opened the door, and heard, "Surprise! You're home! We missed you!" He was glowing. It was so worth it all.
Posted by Teresa - My New Normal at 2:33 PM 1 comment:

Grandma, I don't think I like your hair too much. Is that OK?

I guess he is less-than impressed with my newly permed hair.
Posted by Teresa - My New Normal at 7:53 PM 1 comment:

I took Isaiah swimming the other day. He's very timid but once he got used to the water and the pool (it's only 4'6" at the deepest part), he did very well. Amy bought him a little Speedo life jacket that's not too bulky, but does hold him up, so he was very happy.

We had the pool to ourselves for quite a while but eventually another family showed up. Mom, Dad, and two boys - ages 7 and 3. Of course, Isaiah was drawn to the dad because he was obviously having fun playing with his boys. I was in the water with him, but he kept acting like he wanted to join in their fun. I finally explained to the dad that Isaiah was drawn to him because his own father was absentee and he was really longing for that attention. Bless the man - he started including Isaiah and even had him swimming from me to him. I thought that was very nice of him because he had to let one of his own boys be without a parent while he engaged Isaiah.

We didn't stay too much longer after that as I didn't want to intrude on their family time. I plan on taking Isaiah back today or tomorrow - depending on the weather. 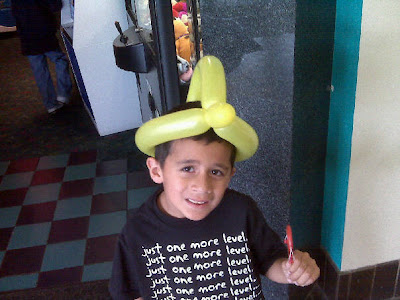 Yesterday, we went to the mall to play at the arcade. Isaiah's not very tall so most games that involve hand and feet action are out of his realm. We tried a driving game but that lasted all of about 30 seconds. Not my idea of fun... me sitting on the floor and pushing in the accelerator with one hand while he's steering. Nope. We moved on.
Offered to let him ride the Batmobile. Nope - didn't want to shake and go up and down.
Offered to let him ride the helicopter. Nope - didn't want to go up and down.
Offered to let him ride the train. Nope - you guessed it... didn't want to go up and down.
Decided he wanted to shoot baskets. It was broken. [sigh] Wanted to play the game where you hit the button to stop the light in between two arrows. That was too tame and he couldn't figure out what light I was talking about. Moved on...
Found the skeeball games. Woo-hoo! Finally found something that he could do - and do relatively well once he found out he could really put some power behind the ball. He won quite a few tickets (OK, so I helped by playing a couple of games myself) and was able to get himself some really {choke, sputter} nice prizes.
Since he was so good-natured about everything, the proprietor gave him the balloon hat. I think it was his favorite prize.
Posted by Teresa - My New Normal at 3:36 PM No comments:

Isaiah likes to punctuate nearly every statement with "You know dat?". The man who picked us up at the hotel to go to the rental car place got to hear a nearly line-by-line synopsis of the Monsters vs. Aliens movie - with lots of "You know dat?" included.

I've started telling him things and following up with the same question. Then I tell him I know that because he told me so and he knows it because I told him so.